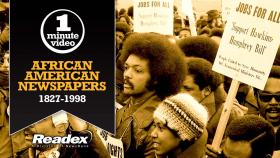 African American Newspapers, 1827-1998 offers scholars valuable primary sources for such diverse disciplines as cultural, literary, and social history and ethnic studies. Researchers can compare and contrast African American views on practically every major theme of the American past.

Coverage spans life in the Antebellum South, the spread of abolitionism, growth of the Black church, the Emancipation Proclamation, the Jim Crow Era, the Great Migration to northern cities, rise of the N.A.A.C.P, the Civil Rights movement, political and economic empowerment. Obituaries, advertisements, editorials and illustrations are included.

At a time when the United States is in turmoil from riots in the streets, and peaceful protests are taking place in nearly every major U.S. city, researchers can discover that similar events happened in the 1860s, 70s and 80s. This article criticizes northern newspapers for consistently "gulp[ing] down the cock and bull accounts of race riots" as being incited by African Americans, when Whites were actually the aggressors. (Note: only Calvin users with login credentials can access this article).